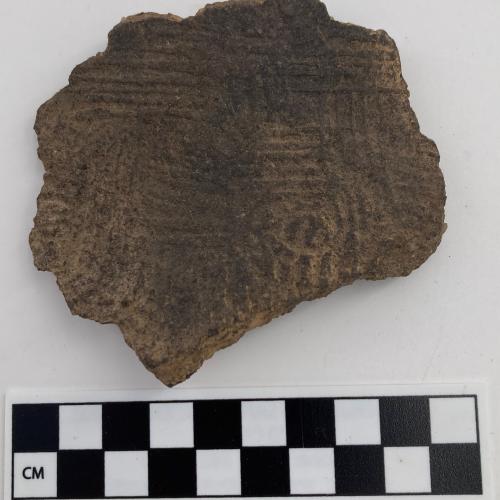 Named after the Altamaha River. This was originally King George Malleated, was changed to Altamaha Malleated, and then to Altamaha Complicated Stamped. Also see Altamaha Line Blocked for comparison. By 1969 it was clear to Caldwell that the design was made by successive application of a simple stamped paddle. He used this term at that time for the type, and this actually makes more sense than the Line Block name, although the former is quite common in the literature now. We now recognize that Altamaha Cross Simple Stamped and Altamaha Line Blocked are two distinct types. 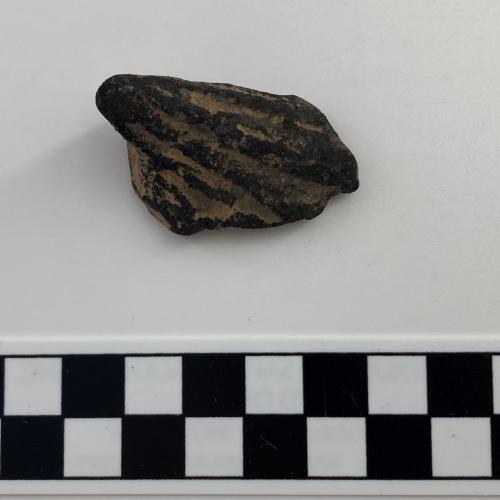 This type was defined by Joseph Caldwell based upon his excavations in the Allatoona Reservoir. It is the equivalent of Deptford Simple Stamped and it has become the standard type for all of northern Georgia and even inland Georgia for the Middle Woodland simple stamped pottery. In general the northern Georgia Cartersville pottery is a little thinner and sandier than similar pottery from the Deptford site and southern Georgia. Named after Cartersville, Georgia.

The Connestee series was named by Bennie Keel from excavations in western North Carolina, particularly the Tuckasegee site. This material is almost identical to Middle Woodland material from northern Georgia. This type is the same as Cartersville Simple Stamped. We believe that these names are better avoided in Georgia, but might be used near the North Carolina border. Named after Connestee Falls?

Formerly Wacissa Cross Simple Stamped. No formal type description is given by David Phelps, who defined it. This is related to Refuge Simple Stamped. 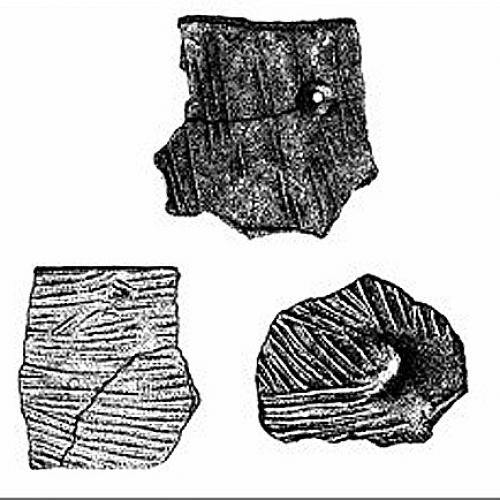 Joseph Caldwell and Antonio Waring named this type based upon work at the Deptford site, 9Ch2 in Chatham County

This type was named by Joseph Caldwell for material in the Allatoona Reservoir. Named after old Galt's Ferry over the Etowah River in Cherokee County.

Named by Joseph Caldwell in his master's thesis after WPA excavations at Fort King George at Darien in McIntosh County near the mouth of the Altamaha River. Joseph Caldwell and his wife, Sheila Kelly Caldwell, eventually renamed this type as Altamaha Line Blocked presumably because this was an Indian pottery that definitely preceded the constructions of the Fort. This term should probably not be used.

This type is the same as Deptford Simple Stamped. Named by Steve Wimberly after the McLeod Estate site in Clarke County, Alabama. This type was included on the Georgia list by Caldwell in 1969 for unknown reasons.

This type is the same as Deptford Simple Stamped. Named by Steve Wimberly after the McLeod Estate site in Clarke County, Alabama. This type was included on the Georgia list by Caldwell in 1969 for unknown reason. 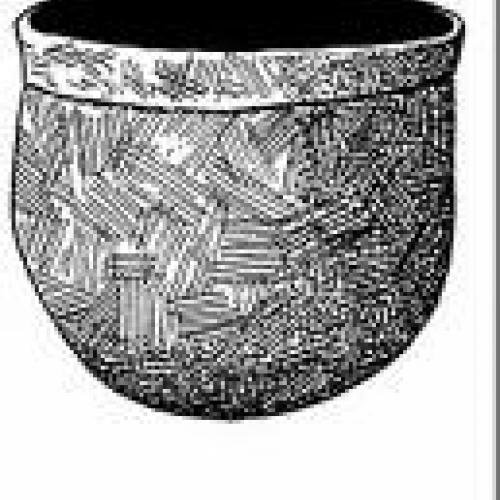 This type was simple stamped pottery first found in Putnam County at the Vining site by Arthur Kelly, and named Vining Simple Stamped by him. Then, in the Macon area, the Mossy Oak site was excavated, revealing Lamar materials on top of this Vining material. The type was renamed Mossy Oak based upon the new excavations. In the late 1930s excavations took place at the Deptford site (9Ch2) near Savannah, and much simple stamped pottery was found there. It was correctly concluded that this was Early to Middle Woodland simple stamping. Researchers jumped to the false conclusion that Mossy Oak in the central Georgia area was also an Early to Middle Woodland type. This misconception persisted until the 1980s, but we now know that this type is indeed a Late Woodland type, and that it is not the same as the simple stamping of Deptford. Because of the confusion of the name Mossy Oak, the name Vining Simple Stamped is now preferred.

This was used by Joseph Caldwell in his Master's thesis, but has not been used since. Named after the Oemler site in Chatham County.

We are not sure this was ever used, although Broyles lists it without comment in her compilation.

Named by Patricia Holden and revised by Bennie Keel, all from work in western North Carolina. This series has an iridescent sheen, and larger tetrapods than the similar, presumably later, Connestee series. Presumably named after the Pigeon River. Probably not a name that is very useful for Georgia.

The Qualla series was named by Brian Egloff based upon excavations by a number of people in western North Carolina, as well as northern South Carolina. This material is essentially Lamar series material, and that term is recommended for use in Georgia. Named after the Qualla Cherokee Reservation. 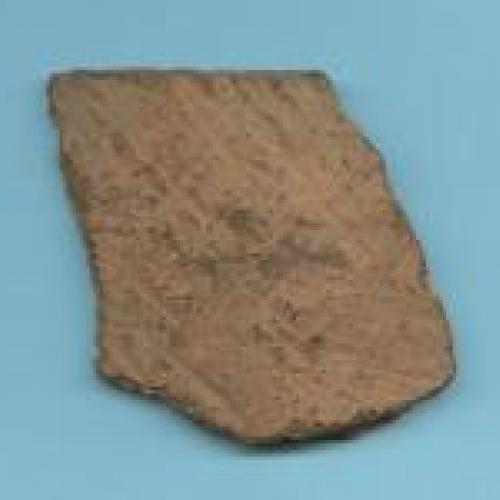 Named by Chester DePratter. Named for the Refuge site north of Savannah, on the Savannah River, which was excavated by Antonio Waring.

This was named by Frankie Snow in south-central Georgia for material that was "semi-fiber tempered" that is, fiber tempered with the addition of sand. This may represent a transition series from fiber tempered to sand-tempered pottery. Named after the Satilla River, this is part of what Snow called the Satilla series. See Willacoochee Check Stamped also.

Arthur Kelly's original name for Vining Simple Stamped. This name was obsolete by 1938. Kelly gave the first types names in Georgia using the letters of the Greek alphabet.

Neither Griffin, nor Sears and Griffin defined this as part of the Stallings series, as with Stallings Plain and Stallings Punctate. Antonio Waring used the name Stallings Island Simple Stamped, but the type name without the word Island is the preferred one at the present. Waring did not formally define the type, however. Ken Sassaman expanded on the type with his work in central Savannah Valley.

This type is part of the Thom's Creek series from west-central South Carolina. This type is discussed extensively in the Groton Plantation Report by Jim Stoltman. Many have suggested that this type is a transitional type between fiber and sand-tempered pottery types. Related to Refuge Simple Stamped, which is a better name to use in Georgia.

Presumably defined by Arthur Kelly or, perhaps, Joseph Caldwell. The name may have been used, but we have not found it in print other than in Broyles 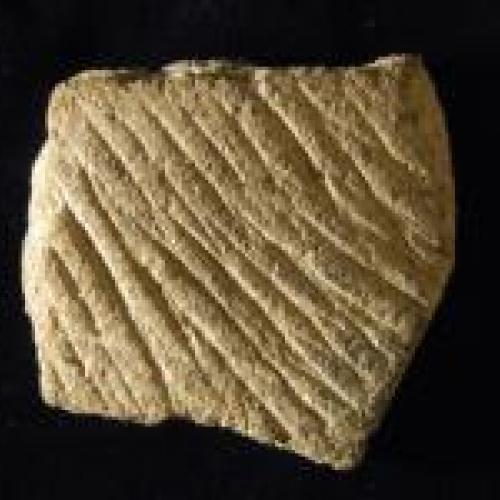 Originally used by Arthur Kelly in late 1930s for material from the Vining site north of Eatonton in the Georgia Piedmont. The type was mistakenly thought to be Early Woodland in date for many years, and was renamed Mossy Oak Simple Stamped in the 1940s. Since the discovery in the 1980s that this material is in fact Late Woodland in date, the term Vining has been resurrected to use for this Late Woodland simple stamped pottery.

This type was originally defined in the Wheeler Basin on the Tennessee River in north-central Alabama based upon WPA excavations there in the 1930s. The fiber-tempered pottery of this area has traditionally been looked at as later than that occurring in the Savannah River basin and Florida. Formerly called Pickwick Simple Stamped.

Named after Wilmington Island on the northern Georgia Coast by Joseph Caldwell.